We are already beginning plans for the Tenth Anniversary of the Tranquil Cafe.  We still have LIVE Music every week currently there is music bi-weekly on Sunday, Monday, Wednesday and Thursday.  Please check either the schedule in Cafe or Live Events.  I am going to try to post the July 2017 Calendar here for those who check this site for it will see if this works: 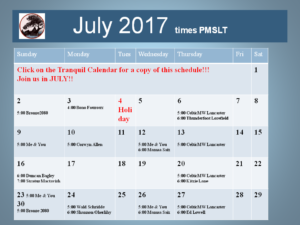 Tranquil Cafe will celebrate 7 years on Sunday April 19, 2015. Check out the original video of the Original Tranquil Sim and the early Tranquil Cafe years at Tranquil Memories YouTube

Brianna has been neglectful of this website and has forgotten how to enter things on the old tabs  so the main page is going to have to manage everything I put up now.  Brianna also discovered a Fantastic new SL performer who comes to us from Broadway his name is Luciano De Prata and sharing the link here of the wonderful video Robert Little took of the event. Here is a pic of Luciano at the party and please go to  Brianna’s Bazaar to follow my contest entries.

Brianna has been busy in both worlds and unfortunately it has led to the ignoring of this website 🙁 She did not place in the finals of the Miss Virtual World contest but did receive the title of Miss Virtual World Ireland 2015  You can view the results of the MVW stylings by going to Bri’s new Blog at   https://aynbrianna.wordpress.com/

Here are some pictures from the Birthday Party this past weekend!!

On August 16,2014, Brianna was finally selected as a Miss Virtual World Finalist!!! She has been trying for this honor for at least four years now and is thrilled to finally get the opportunity to compete for the coveted Miss Virtual World 2015 title.  Bri is committed to sharing all of the information about her stylings and work on this project but on occasion she can not release the styling information until following the competition! If you would like any information about her competition styling and you don’t see it on her blog Brianna’s Bazaar just IM me inworld and will do my best to find it. The following is the styling that Brianna wore for the August competition.

Note the Tranquil Studio logo on the pic, Bri finally is going to try to remember to place that mark on all of her pictures from now on!  The final competitions of the MVW contest will be broadcast live and if Bri receives the information early enough in advance it will be posted. The Final Competition will be held on Sunday December 14 at 10:00 am slt.

On April 20,2014 the Tranquil Cafe celebrated it’s sixth anniversary. The event was highlighted by performances by one of the earliest Tranquil venue performers, dpatrick flow, who played at the first open mic in Tranquil Commons, and mr. fingersatz barbosa who replied to the open mic call.

Following the annniversary Bri rearranged performer schedules to permit her a bit more free time and added a Saturday concert featuring mr. fingersatz and another former Cafe performer Ictus Belford. Check out our schedule here and in the Cafe for current schedules.

Last nite, March 3,2014, Brianna celebrated her 7th Rezz Day!! Great turnout of friends made the evening very special indeed!! First Chris Evermore performed at 5:00pmslt, then Christopher Quan at 6:00pmslt.  The following is a YouTube done by Robert Little, Bri was a golden girl and enjoyed every minute of the party!!

The Sixth Anniversary of Live Music in Tranquil Commons was attended by over 122 peeps during the six hour concert.  The music was great and a fun time was had by all 🙂

Once more the Tranquil Venues are Moving.  The first show will be on Sunday December 15, 5:00pmslt.  The Tranquil Sim that Brianna opened in November 2010 will be relinquished back to the Lindens in January.

Unfortunately the new location only has room for the Tranquil Cafe, Commons and the Starlight Ballroom. Eventually she may be able to add more land to bring back the Mola Museum and Haven. The Tranquil Sim was founded on November 17, 2007, it was sold in 2009 and Brianna purchased another sim and named it Tranquil on November 6,2010. The second sim will be abandoned on January 5, 2014.  A tribute to the old sim Tranquil is available on the Tranquil Events YouTube site which may be accessed in the network links on this page.

Live music is still  featured for at least two hours from 5:00pmslt – 7:00pmslt every Sunday – Thursday nite.   Go to the Tranquil Cafe Now!

At the Tranquil Cafe in Second Life ® you will find live music, dancing, a hangout spot with folk music, and a place to meet new friends. Click on the Event Calendar to get schedule for live music!

Brianna Beresford is your hostess at the Tranquil Cafe. She is a social network butterfly and can be found throughout the Social Web.

Bite Catering is one of Brianna’s favorite businesses. Click the Bite tab above to view some parties she catered in Second Life®.